Here is the card I made inspired by the Easy ink blending Altenew academy class. After trying different card stocks to ink blend on I opted for Neenah classic crest cardstock. After cutting an aperture in a piece of card stock and then drew a pencil line onto another piece of cardstock so that I knew where the aperture would be. I then used the inks volcano lake and ocean waves to ink blend over this card stock with volcano lake blended into the centre and ocean waves more around the edge. I then used the little bubble stamp from Goldfish pond stamp set to add some texture to the background.

I hope you like my card. I would encourage you to do the ink blending class I got lots of tips from it to improve my ink blending.

Here is my second submission for AECP. This time I did the Altenew Academy All about layering 2. This class gave even more inspiration for using layering stamps and I got some great inspiration from this class.

I loved the idea of stamping onto die cut letters. The card I got inspiration for this card from was a very pretty card with flowers stamped on the letters. I thought I would change it up by making it more masculine and also, making a start on my Christmas cards. There is only four months to go!

I then cut the word MERRY out of them and cut out three more sets of MERRY to layer them up. I used the caps bold alphabet die set for this.

To put the card together I cut a square of Neenah desert storm card and attaching the die cut letters across the front. I then stamped Christmas from a stamp set from clearly besotted. I also attached some pearls from my stash that I coloured in to match the greens with artist markers in moss and evergreen.

I hope you like my card for the All about layering 2 class. I certainly enjoyed this class and I am looking forward to sharing cards from the next classes.

I love making cards for men, so this was right up my street. The first card I made was using the idea of geometric designs.

I used Shades of love mini stamp set and the sentiment was from Painted inspiration. The inks I used were Ruby red, Espresso, Evening grey and graphite.

The second card I made was for my brother in law. He has set up a camera trap in his garden and has been getting pictures of a fox in his garden. I loved the galaxy card in the class so used this technique to make this card.

I used the following distress inks – blueprint sketch, salty ocean, seedless preserves, fired brick, mustard seed and black soot. I then used hero arts unicorn pigment ink and perfect pearls to make the stars in the sky. The perfect pearls gave them a lovely shine that is hard to photograph.

The fox was stamped with modern fox using versafine onyx black on black cardstock and then heat embossed with clear ink. I then fussy cut it out as I don’t have the coordinating die and cut a hillside from black cardstock which I stamped happy birthday and heat embossed with white embossing powder. This sentiment is from painted greetings stamp set.

The day after my OH brother’s birthday it is my sister’s OH’s Birthday so I made this card for him. He likes gaming and I was inspired by the valentine’s card in the class.

I used Best Dad stamp set, Artist markers in Ruby red, Sapphire, Mango smoothie and forest glades. The sentiment was cut using Caps Bold Alphabet dies. I used the letter G for the number 2 and cut out the bottom of it by hand. The celebrate sentiment came from label love stamp set.

I hope you like my cards today and will look through your stamps to see how you can make cards for the men in your life.

I ended up making two cards for this class, but it didn’t quite go to plan.

The card below was my trial at foiling. The class show different ways of adding details to take your clean and simple cards to the next level. Foiling was the technique I thought I would have a go at. I have tried foiling before and it hadn’t gone well and I had given up. This class gave lots of tips that I thought would give me better results.

So I found out the foiling kit I had. I don’t want to be a bad workman blaming his tools but I do wonder if the foils I have are letting me down, as they weren’t very expensive. I stamped one of the layers of Beautiful Day stamp with volcano lake ink and then left it to dry for a few minutes while I started on my second attempt. When I had left it to dry I used talc to get rid of any fingerprints etc, before stamping the outline images with versamark ink and heat embossing with detail clear embossing powder, (mine is stampendous). Once set I put the gold foil over the top and ran it through my laminator. What came out – looked a mess. So I tried again. Here is my second attempt using red foil.

My second attempt was even worse. the foiling had stuck to patches all over the card. I don’t know what caused this. Anyway looking at my first attempt I decided that although areas of the card had big smudges over it the flowers themselves weren’t that bad so I decided to cut them out with the coordinating dies. Here is a close up picture where I tried to catch the shine of the foiling.

I then decided to pop them up on a black card. I tried a different method of foiling to add some details in the background by adding red liner tape and then adding the foil to this.

The sentiment was from beautiful day stamp.

This card was a US A2 size. This size card isn’t standard here in the UK so it’s more difficult to find envelopes for them. Another lesson in the class looked at making envelopes. So I decided to make a matching envelope from vellum with the same gold foiling to match the card.

I had much better success with the technique of watercolouring from another lesson in the class.

I used the tall vase stamp and stamped the outline multiple times on watercolour cardstock with versafine onyx black ink. I used frayed leaf to fill in the leaves using the layer stamp.

I then used Sapphire, warm sunshine and ruby red ink to watercolour the vases of the image using a brush and water as I don’t have any watercolours.

The big sentiment was from painted greeting and the “Have a nice day” was from Tall vase. The sentiments were heat embossed in white onto black card.

I really enjoyed this class. It gave me lots of techniques to try. Some I was more successful with than others, but it was fun to give them ago. I would recommend trying different techniques. They aren’t always successful, but at the end of the day the worse thing that happens is you have to throw away some card. Even if it does go wrong you may be able to salvage something so don’t give up straight away.

As Albert Einstein said if “you haven’t failed, you haven’t tried anything new”. 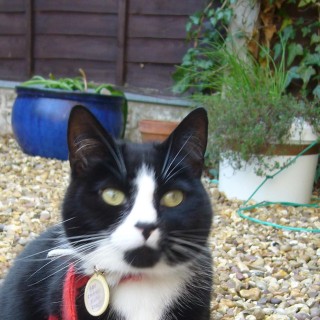 I am a crafter, mainly enjoying card making. The name mycraftysmell comes from my sister calling me Smell when I was little.My cat Romi came from a rescue centre and she is my baby. I work in a High School as a Science Technician.